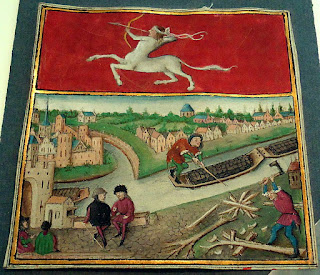 A private collector has sent me images of the very curious cutting above. The upper ⅓ has Sagittarius, and the lower ⅔ has a scene with pairs of men in conversation, a man splitting wood with an axe and a wedge, and a man propelling peat(?)-barges along a river.

The reverse has part of a life of St Plectrude, who is said to have founded S. Maria im Kapitol, Cologne (note "venerabilus vidua Plectrudis", line 4; "cives Colonienses", lines 11-12), but it has not been possible to identify the text. The script looks typical of the general Lower Rhineland area, and uses the punctus flexus punctuation typical of Cistercian and Carthusian scribes (last character of line 4): 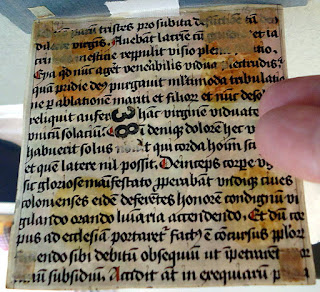 Another cutting, clearly from the same manuscript, was sold in the Korner sale at Sotheby's, 19 June, 1990, lot 27: 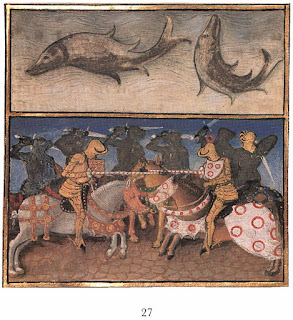 Here the zodiac sign is Pisces, and the Sotheby's catalogue interprets the lower scene as the Battle of the Austrasians and the Thuringians, because the text on the reverse is part of the life of St Ignatius of Antioch, whose feast-day was 1 February (and thus Aquarius would be appropriate); the miniature could therefore relate to St Sigebert of Austrasia, whose feast-day was also 1 February.

St Plectrude's feast was on 11 August, however, whereas Sagittarius belongs in November and December.

A possible connection with the Rhineland/Cologne area is provided by labels on the back of each cutting. I only have a picture of the back of the Sagittarius one:

but the Sotheby's provenance description states:

The provenance of Lot 10 begins:

The Sotheby's catalogue does not provide any support for the statement that these lots were owned by Sir Thomas Phillipps (except that they had been acquired by Korner from the Robinson brothers, who acquired and sold a large quantity of ex-Phillipps material), but if lots 10 and 27 both had "388" it is plausible that the third digit of in the image above is also an "8". Further, lot 10 (now in a private collection in London) is in the style associated with Johannes von Valkenburg, providing a second strong connection with Cologne: 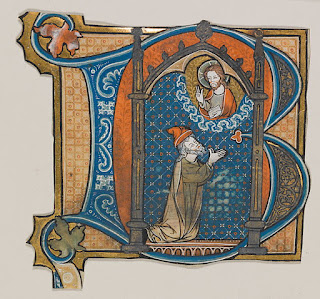 The existence of two cuttings with two signs of the zodiac suggests that there are ten more waiting to be recognised. Does any reader know where any of them are?


Edit, 4 Dec. 2016
I have had a very interesting response from Prof. James Marrow, who writes:


"The cutting you posted in your most recent blog looks to my eyes to be a work by the Master of Evert van Soudenbalch, a Dutch miniaturist with roots in Cologne who was active ca. 1460-70, or just possibly by his close collaborator, the Master of Gijsbrecht van Bredrerode. The style is close to works by the Soudenbalch Master's hand in the Bible of Evert van Soudenbalch in Vienna (ONB Cod. 2771-72), as well as to some of the painter's work in the manuscript of De natuurkunde van het geheelal in Wolfenbuettel, HAB Cod. Guelph. 18.2. Aug. qu., which also has Zodiacal signs. If I had to guess, I would suspect that the fragment was from a manuscript somewhat like the Wolfenbuettel codex, which mixes religious with secular texts.

The subject matter of the cutting seems to be activities of the months -- or rather, the activities of those born under different signs of the Zodiac -- as found, for example, in the famous manuscript of the Hausbuch. The section below includes what I suspect is a relatively rare depiction of rafting (Flösserei), which was the scheme used to float heavy materials down rivers by lashing tree-trunks together to form floating rafts and linking them together fore and aft. As the Flösser reached larger rivers, they lashed the individual floating units side by side and lengthwise to form larger rafts, so by the time they reached major rivers, such as the Rhine, the rafts were large enough to live on until they reached their destination. As you may know, Amsterdam was built on massive tree trunks that were floated down the Rhine from areas such as the Black Forest in this manner. The Flösser had their own guilds, which faded into obscurity only with the invention and spread of railroads in the 19th century."

If this is your first comment, please first read the very first blogpost

Follow by Email: New posts straight to your inbox!